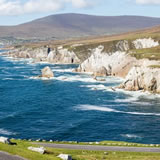 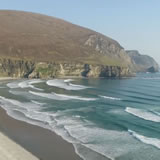 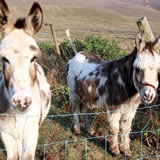 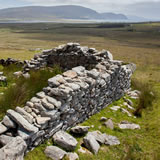 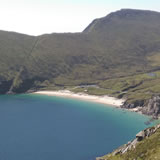 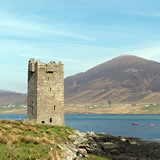 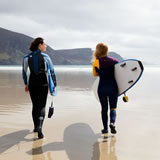 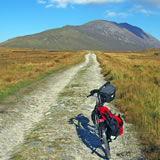 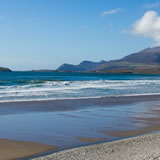 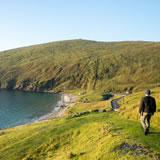 Achill Island is located off the west coast of Ireland. Connected to the County Mayo mainland by a bridge, it is Ireland's largest island at 57 square miles. Achill is home to five Blue Flag beaches, numerous mountains and cliffs including the highest sea cliffs in Europe and also the iconic Minaun cliffs close to the location of Minaun Cliff Cottages.

Achill's natural beauty has long provided inspiration to artists and writers including the painters Robert Henri and Paul Henry, and novelists Graham Greene and Heinrich Boll. Boll's legacy is celebrated with an annual Arts Festival every May Bank Holiday weekend, with events typically including a writers workshop. The annual Scoil Acla summer school also features modules for writers as well as traditional Irish music, song and dance. A recent addition to the Achill calendar of events is the annual Achill International Harp Festival, taking place each Autumn and attracting harpists from across the globe.

Achill's spectacular landscape provides a perfect canvas for a wide range of outdoor activities, from hillwalking to water sports to cycling to golf and much more:

Hillwalking
With much of the land in common ownership access to the hills and mountains is largely open, and Achill has 14 circular walks (printable guides available from achilltourism.com) of various difficulty levels along with the recently developed Slí Grainne Mhaol signposted loop walk in Kildavnet.

Cycling
The Achill Cycle Hub consists of three loop trails (download PDF map & guide) while the Great Western Greenway is a pioneering walking / cycle track built mainly on the former line of the Westport to Achill railway. The popularity of the Greenway means cycle hire is widely available in Achill, and the track is currently being extended further into Achill.

Water Sports
The island's Atlantic waters and the gently sloping beach at Keel are perfect for surfing, and a number of local providers offer both suit / board hire as well as tuition. Kayaking and canoeing, both sea and freshwater, are also available while a nationally-renowed kitesurfing school offers hire and lessons on Keel lake. A scuba diving school operates from Purteen Harbour.

Golf, Horseriding & Fishing
Just a short walk from Minaun Cliff Cottages is Keel Golf Club, a nine-hole links course on Keel Sandybanks. Also in Keel is an equestrian centre with pony trekking sessions. Achill's Atlantic waters are home to more than 30 species of fish so it is no surprise that angling is very popular on the island, both from the shore and also boat trips may be commissioned from Purteen Harbour.

Plan Your Visit
Some key dates for events in Achill:

St. Patrick's Day (17th March) - Follow one, or more, of Achill's many pipe bands as they march a traditional route between villages. The village of Dookinella, location of Achill Wild Atlantic Lodge, has a long-established pipe band and hosts the annual gathering of bands from Dooagh, Pollagh and Keel outside the church on St. Patrick's Day.

May Bank Holiday - vist events for the Heinrich Boll Memorial Arts Weekend, or just enjoy the craic in spring time.

1st Saturday in July - Achill Half Marathon & 10K. Join with over a thousand runners, joggers and walkers at the annual Half Marathon and 10K run, starting and ending in Keel.

September - competitive sports come to Achill with the QUEST Achill triathlon type event, the Tour de Achill cycling event, and the national kitesurfing championships as part of the Battle for the Lake music and kitesurfing festival.

New Year - ring in the New Year with the last sunset in Europe, Achill's pipe bands, and a bracing Atlantic dip on New Year's Day.